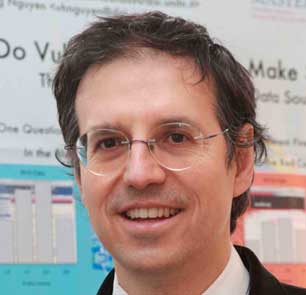 Fabio Massacci is a full professor at the University of Trento (IT). He is a chartered engineer and has a Ph.D. in Computing from the University of Rome La Sapienza in 1998. In his career he has visited Cambridge (UK), Toulouse (FR), Siena (IT), Rutgers (US), Durham (UK), Leuven (BE), University Southern California (US). He has published more than 250 articles in peer reviewed journals and conferences and his h-index is 42 according to Google Scholar. In 2015 he also received the IEEE Requirements Engineering 10 years most influential paper award for his research on security requirements engineering (reasoning in trust, ownership, and delegation). His current research interest is in experimental methods for cyber security, from vulnerabilities to security economics as well as security for FinTech (Financial Technologies). He has been coordinator for several multi-million research projects and among them he was the European Coordinator of the project SECONOMICS (www.seconomics.org) on socio-economic aspects of security. Part of the ideas behind this research has been now incorporated by the world standard Common Vulnerability Scoring Standard (CVSS) v3, just released in June 2015. He and his students has worked in industry projects with several private companies among them SAP, Symantec, and CISCO.